We Work Hard, And It Turns Out We Play Hard, Too!

When the majority of your days are spent in front of multiple computer monitors, sometimes you need a little break from the daily grind. At a growing software company, we spend our busy days developing new features and technologies for the property management world, and interacting with the users who rely on our products for their own daily operations.

Sounds a little stuffy, right? But that’s the thing¦ LCS is anything but a stuffy technology firm! We are a family of developers, designers, supporters, and communicators; a diverse group of people who truly get along and enjoy each other’s company, as much as we enjoy what we do for our customers.

The first official LCS office housed just a handful of employees back in 1997. On a new team memberâ€™s first day, LCS President and CEO, Dave Hegemann, would take them to lunch; and once a quarter, everyone would pile into Dave’s SUV to have breakfast and talk strategy. Twenty years later, the LCS workforce is 230 strong. Now, Dave meets with new hires on a monthly rotation, and hosts a series of small-group, donut-infused meetings – 20 employees at a time -to stay accessible to/connected with his growing team. That’s why staying connectedis a common theme and a continual priority here at LCS.

After witnessing our partner, PayLease, host their annual PayLease Olympics to rave employee reviews and improved company morale, we were inspired! The PayLease Olympics includes workplace-friendly games of office-chair races, putt-putt golf, karaoke, etc. An entertaining day of having fun and getting to know one another was our example and ultimate goalâ€¦ but one theme started to emerge as planning commenced: Go big, or go home! And so, the first ever LCS Olympics were meticulously planned by our social committee in early 2017.

The company’s 230 employees were divided into six equal teams, given a team color and corresponding t-shirt, and then sent on their way to start making plans. The players had fun choosing team names, designing their uniforms, and creating psyche-out videos to rile the competition as the big day loomed. Teams were asked to assign participants to each of 16 back-to-back games, making roster decisions based only on the game’s names, number of players required, and simple game descriptors like Mental, Physical, Teamwork,  etc. Excitement was in the air as the event drew near, but since this was a first-time event, some were still a little nervous about the big day. 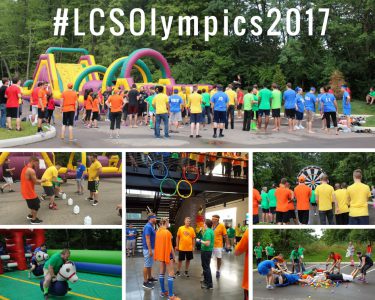 Friday, July 21st arrived and the Opening Ceremony commenced in the company’s three-story atrium, which included a tense game of cornhole with Dave Hegemann and Sales & Marketing Director, Brittany Christerson, squaring off against a team of two special guests from PayLease. Their President, Ty Kalklosch, and CEO, Dave Dutch, flew in from San Diego to see if our Olympics could stack up to theirs, and brought with them co-branded cornhole boards just for the occasion. Staff lined the atrium railings for the spectacle and got excited for their own games ahead. PayLease won the faceoff this year, but LCS is ready and waiting for a rematch in 2018!

The rest of the day was seriously jam-packed: 16 incredible games a new one starting every 20-30 minutes kept the referees and their helpers busy, and got the LCS staff engaged and active. Since the games were disguised in advance, the unveiling of each event was met with gasps of surprise and peals of laughter. We had Feeling Hip, which turned out to be a human-sized version of the childhood classic, Hungry, Hungry Hippos; Cognizance, a giant Rent Manager-themed game of Memory; an enormous inflatable obstacle course veiled in advance as the Olympic Challenge, The Knot, Pony Downs, Dizzy Punt, Big Foot, and much more. When the events came to an end and our Olympics Leaderboard was tallied for the final time, Team Big Red Machine came out on top, but every LCS-er felt like a winner after getting a chance to get to know their coworkers better and shake up their daily routines a whole lot. The competition and comradery throughout the day were truly amazing.

The first-ever LCS Olympics wrapped up with an official Closing Ceremony that included awards for the top three teams Kinda Irish finishing third, The Bus Drivers coming in second, and Team Big Red Machine taking home the gold. The ceremony was followed by a catered picnic complete with a scavenger hunt for employees and their families to enjoy as they wandered through the halls of the company’s Cincinnati headquarters.

And so, the inaugural LCS Olympics were bigger and better than anyone could have imagined, and the overwhelming consensus is that we can’t wait until next year! Check out our video and a few of our photos for just a small taste of the fun and excitement of the day.

RentManager.com Has a New Look

9 Reasons to Love Working at LCS